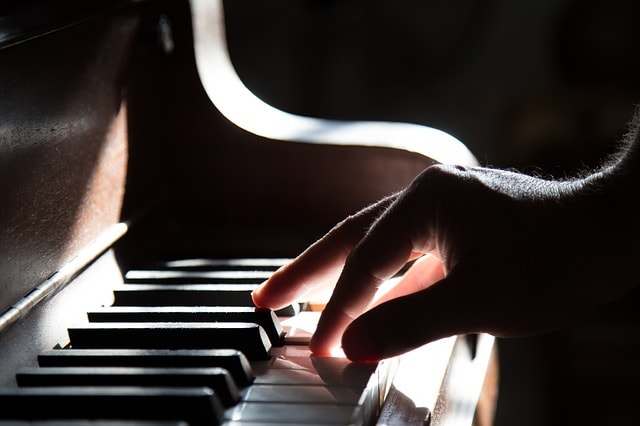 The first thing a person learns while playing Piano is scales and chords. But then when he switches to songs, the chords are a long forgotten business for a long time.

All that a person wants first is to play the melody of a song perfectly before switching to the chords alongside.

But as much as people fear from the chords, it is fairly easy to join both chords and melody for playing a song. Many of the songs only have 4 piano chords into use. And so, switching your left hand from one chord to another subconsciously becomes easy after just some practice.

You must be knowing about Pareto’s Principle commonly known as 80-20 rule. This rule also applies to the songs. According to it, 80% of the songs can be covered by following just 20% of the chords. And here we will be talking about 4 such chords that nearly all the songs use.

These chords consist of 3 key presses, also known as Triad. And all these 4 chords are formed using the C Major scale – C D E F G A B C.

This is the 1st major chord (I from the pattern I – V – vi – IV) from C Major scale, also the primary triad of the scale. We use the 1st, 3rd and 5th keys of the scale to form the C Major Chord, i.e., C E G. To play the scale with your left hand, press C with your last finger, E with the middle one, and G with your thumb. If you press all the keys together, you will get the C Major chord.

This chord is the most basic and widely used one in most of the songs. If you have noticed, it contains no sharps (or flats). All the songs that are played in C Major chord manage to be uplifting. Once you master this chord properly, you have managed to play maximum of the songs using both melody and chords.

This is the 5th major chord (V from the pattern I – V – vi – IV) from the C Major scale. This is also the primary triad of G Major scale – G A B C D E F# G. To play this chord, use the 1st, 3rd and 5th keys starting from the key G. We get – G B D, which forms the G Major Chord. To play it with the left hand, use the same pattern as of C Major Chord. Press last finger on G, middle finger on B, and thumb on D.

Since this is also a major chord, this also has a very upbeat or happy feeling to it. And hence, it makes another popular chord for most of the songs.

A Minor chord is formed using the 6th degree of the scale (vi from the pattern I – V – vi – IV). It is also the primary chord of A Minor scale – A B C D E F G A. Press 1st, 3rd and 5th keys starting from the A to form this Minor chord. Use the same pattern of hand as in the above chords.

This is the only popular minor chord that appears in maximum songs. And this minor chord is popularly used to give a sad and dark background tune.

The A Minor is also referred to as the C Major of Major chords, the reason being A Minor scale has no sharps or flats, just like C Major scale.

F Major chord is formed on 4th degree of C Major scale (IV from the pattern I – V – vi – IV). It is also the primary major chord of F Major scale – F G A Bb C D E. Follow the same pattern of 1 – 3 – 5 key presses starting from the letter F to obtain the F Major Chord – F A C. Again, this chord is used too give a happy background tone.

If you have noticed, all these widely used chords do not use any sharps or flats, making them very easy to play and remember. And this progression of I – V – vi – IV is the most popular progression in the Piano music industry.

Using just these 4 chords, you can play a large number of songs easily. Some of them include Cheap Thrills, Let It Go, Faded, Love the way you lie, and many more.

You might face difficulty in the first song. But as you practice to switch your hands, the other songs become only a task of learning melody.

To learn about chords in depth, read this piano chords tutorial by MyPianoNotes.com. Hope you will now enjoy playing these widely popular numbers easily with chords on the piano.